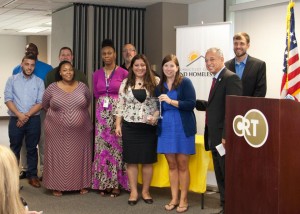 The housing and shelter collaborative known as the Greater Hartford Coordinated Access Network (GH CAN) has  been meeting on a weekly basis for over a year. Their task has been to coordinate resources and services, which include about 60 housing programs and 12 emergency shelters. As if implementing these system-wide reforms was not enough, four months into operation, the GH CAN was preparing to embark on a campaign that would put its agencies, staff and newly formed partnerships to the test.

Lead in Greater Hartford by Journey Home and in other regions by Connecticut Coalition to End Homelessness (CCEH), the 100-Day Campaign officially began on March 11. Greater Hartford’s goal was to house 100 of our highest need, chronically homeless clients by June 19th . If that goal sounds almost impossible, that’s because it was supposed to be. Committing to lofty, sometimes unreasonable goals is all part of the Rapid Results 100-day framework. The model is designed to use those commitments to unleash creative potential and forge new infrastructure for change. And that is exactly what happened. Continue Reading Here