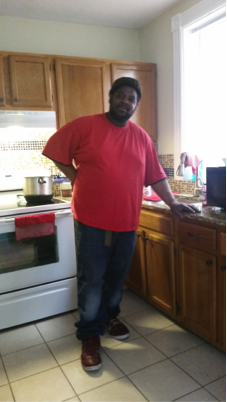 Journey Home is proud to announce that Shawn Robinson has been housed through the Moving On program. Shawn moved into his new apartment on November 20, 2015 after several years of living on the streets of Hartford. Before being placed in his new home, Shawn was chronically homeless and spending his nights sleeping in the passenger seat of his friend’s car. Now he is living in a one-bedroom apartment where he is finally able to feel the comfort of his own bed.

A former addict, Shawn is dedicated to his recovery and maintaining his sobriety. Throughout the housing process, he has worked hard to obtain the necessary documents for his housing program. Prior to being housed he had no social security card, no birth certificate, and no photo ID. Now he has all of his documentation and is settling into his new home and hoping for some peace and quiet from the hectic environment of Hartford. Years of homelessness have taken a toll on his health and his sleep cycle due to the nature of living outdoors in a highly populated city. Now that he has his own place and his mind is not occupied by the stress of living outside or in shelters, Shawn is able to focus on his own health and taking care of his ailing mother.

With the help of volunteers and donations through the furniture program, Making a House a Home, Shawn was also able to get a bed frame, blankets, cleaning supplies, and other necessities for daily living. He is now safely housed in a fully furnished apartment where he enjoys cooking his own meals and spending time with nearby family members. It’s been a long and arduous road for Shawn but with keys to his new apartment in hand, he can look forward to a bright future ahead.